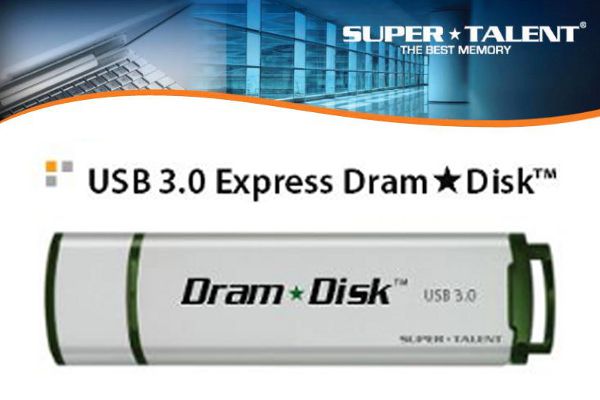 Increasing data transfer speeds are proving to be an important part of today’s tech experience. This is especially true for users running on large programs or software. These people include professionals like graphic or web designers. It is often a frustrating experience when dealing with mediocre read and write speeds, even for people who are used to, say, a slow connection – it just makes the frustration all the more frequent. This is the reason why RAM disks are important components of the computer experience.  RAM disks, or RAM drives, partially solve this problem by giving users a performance which is faster (by miles) than other storage devices like a hard drive or an SSD, so wait times are now significantly reduced with a RAM disk.

Just recently, we might have just seen the birth of a milestone in RAM disk technology. Super Talent Technology, which is a manufacturing company of flash storage devices and who introduced top performing USB 3.0 devices in the past already, has just recently introduced the USB 3.0 Express Dram*Disk. The Dram*Disk offers a comparatively superior performance, with a sequential read speed of 4041 mbps and a sequential write speed of 5388 mbps. It comes with proprietary software which therefore makes it all the more easy to use. It sized quite compactly at 70x18x8 mm and is housed in an Aluminum casing.

A neat feature of the USB 3.0 Express Dram*Disk is the ‘expert’ feature where relatively better versed users can be able to tinker with some settings to increase performance. Although it would have been better if these expert features were more understandable to average users in a more simple way, it’s nonetheless a plus for the Dram*Disk. The Dram*Disk also features MLC NAND flash memory so data retention can be up to ten years. And it can also be used on multiple computers.

The USB 3.0 Express Dram*Disk comes in several capacities: 8GB, 16GB, and 32GB and 64GB. It is compatible with most Windows operating systems like Windows XP, Windows Vista, and Windows 7. It is also works best with a USB 3.0 interface, but is backwards-compatible with a USB 2.0 interface as well. The price range of the variants comes at $59 to $209.

Overall, it is quite easy to see the value that the USB 3.0 Express Dram*Disk offers even from a casual user’s perspective, and given the track record of Super Talent, this most likely won’t disappoint.