A USB hub consists of a unit that enables the insertion of multiple USB devices (like cameras, flash drives, MP3 players, printers, scanners) into ports for charging and functioning purposes while linking to a host computer. It can operate as an extension of a primary USB port, therefore enabling more devices to be used at once. 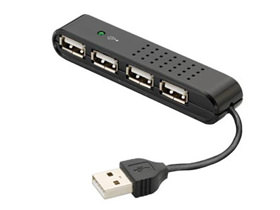 The layout of a USB hub displays approximately four to seven ports plotted within close distance of one another and together compiles a square or rectangular box.

A horizontal orientation of the ports may limit the use of other ports if the device is large enough to block them. “Star hubs” design ports on each side of the hub box itself to combat the issue of blocked port entries.

One of two power methods is used for USB hubs and some hubs offer the versatility of using either type of power. Bus-powered USB hubs receive power from the host computer’s USB bus and do not require another power source to operate.

The power strength of these hubs is limited, therefore compatible devices with lower power requirements are recommended for use with them. If your USB device already has its own power source, avoid a bus-powered hub. They require 100 milliamps of power for each port, but cannot anything higher than this power measurement. In this instance, a host computer may notify the user of the incongruity between the device and hub.

A self-powered USB hub is plugged into a power source independent of the host computer, like an electrical outlet. This creates convenience for use with handheld devices as well as larger devices like scanners, printers and video cameras. These high powered hubs allow approximately 500 milliamps to be plugged into each USB port. Bus-powered USB devices will also work on self-powered hubs.

Speed is another key factor for USB hubs. For optimum function, high speed devices need to operate with a high-speed hub. However when needed, these devices can use full speed hubs or computer ports, but will not operate at their greatest potential. High speed USB 2.0 hubs are resourceful in that they can tolerate the speed of any device through the isolation of lower speed data traffic from higher speed traffic with the hub’s transaction translator, also known as a TT.

This USB hub component acts to simultaneously divide traffic and communicate with the upstream hub to put lower speed transactions downstream. This filtering translator ensures that lower speed devices that are unable to handle high-speed traffic will not need to.

Multiple transaction translators can be implemented when there is the need to connect multiple devices that require large doses of bandwidth, as speed performance deteriorates when several of those peripherals share a hub that has only one translator. Consumers must bear in mind that not every USB 2.0 hub is high speed, as slower peripherals with 2.0 capabilities leave a market for slower speed USB 2.0 hubs.

During the USB hub transmission process, data from upstream ports from Type A sockets (the hub) distributes information to devices attached downstream to Type B (peripheral devices have these plugs). The host computer recognizes the connection of the device through polling the interrupt endpoint. Subsequently, the computer understands that it can interact with the device after this exchange.