CES 2019 in Las Vegas, Nevada has fulfilled its promise to be an exciting year in electronics, showcasing new and exciting innovations and giving pioneers a medium for advertising their dreams. In case you didn’t know, CES is the “world’s largest gathering place for all those who thrive on the business of consumer technologies,” according to the CES website. It’s basically a gathering place to show off new technologies, prototypes, sneak peeks, and get the public (and investors) excited to fund and purchase tech.

One of those newest sneak peeks is from SanDisk, a major manufacturer of flash drives and flash memory products. You’ve probably heard of them; more than likely you own one of their USB drives or SD cards. They’ve outdone themselves this time, unveiling a prototype of the world’s first and only 4TB USB C thumb drive.  It is quite literally the size of your thumb and easily slips into a pocket or purse. To give you some perspective on just how big of deal 4 terabytes of storage is, consider this: current data storage is maxed out at half as much (2TB). SanDisk has effectively found a way to double data storage capabilities. It can store 1,000 movies and one million songs! It is an absolutely dizzying amount of storage space.

Some have argued that it isn’t a flash drive per say because the USB-C port is separated from the device hull by a cord. So, it’s more of a SD card with USB attachment. It is an odd choice of design on SanDisk’s part, especially since 2TB USB drives still retain their typical memory stick design. However, it is a prototype, and this may have been their only way of ensuring a complete 4TB capacity. It’s possible that SanDisk was unable to configure that amount of memory in the expected size, shape, and design for flash drives. 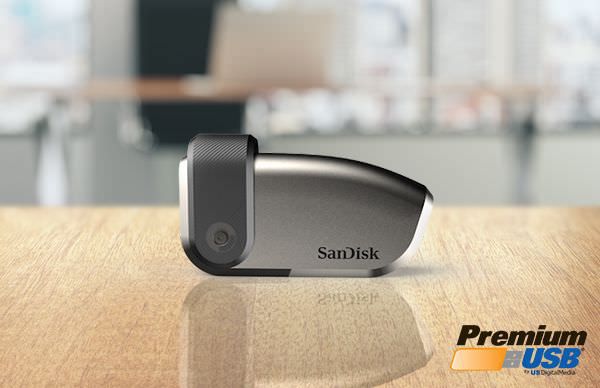 Unfortunately, as it is a prototype and SanDisk has not released other specs (besides that it is USB-C and 4TB capacity), there isn’t much information about it. Currently, 1 and 2TB flash drives—authentic ones, not cheap fakes—still cost upwards of $1,000. Kingston’s 2TB DataTraveler Ultimate GT with USB 3.1/3.0 transfer speeds goes for $1,200 on Amazon. Corsair’s 1Tb Flash Voyager GTX USB 3.1 USB drive goes for $480 dollars and change on Amazon. Terabyte sized flash drives are still relatively new to the market so they’re prices haven’t dropped significantly. Most flash drives with more than enough storage capacity for the average person can be bought for under $20 (quite often much less than that, even). Considering the price point for 1 and 2TB drives, the 4TB model from SanDisk could easily climb as high as $2500.

It brings to question: just who are these fantastically huge drives marketed for? Many corporations strongly discourage or actively prevent employees from using them for work purposes and the American military, a likely target market for big data needs, outright bans them. Their hefty price tags are arguably fair considering their value but who needs to transfer and store up to 4 terabytes of data at once? Well, even if you don’t require that much space now, data tends to accumulate over time, so you will find yourself needing to upgrade to larger and larger storage capacities. Some argue that it’s better to start out too big and grow into it; there isn’t harm in having too much space, after all.

Don’t forget: this prototype appeals to the growing USB-C audience which is set to become the industry standard port for electronics and transfer technology.  The fact that SanDisk chose the USB-C style port for this model is no accident; they foresee USB-C’s growing and continued importance in future tech.

SanDisk also introduced several other flash memory products, including the new SanDisk Extreme Pro Portable SSD with 1GB/s transfer speeds and IP55 rating. Rumors are that it will arrive later in the year with an eye opening 500GB of storage.