What is USB 3.2? Why USB Naming Just Got More Confusing 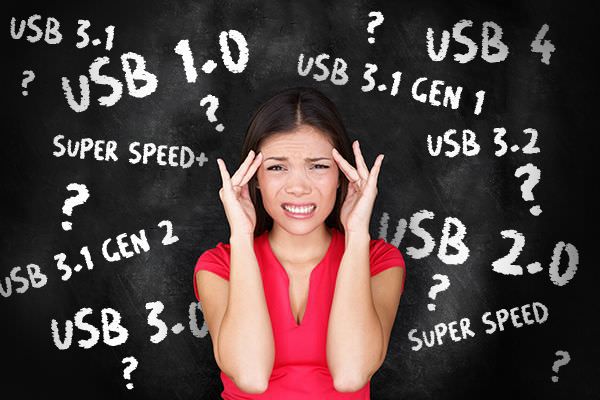 The USB Implementers Forum, Inc., the non-profit gathering of companies devoted to developing the Universal Serial Bus specification, has done it again. They’ve gone and renamed USB specification names, again, leading to mass confusion and discontent in the tech world. If you’re unfamiliar with USB technology, updates to the specification for transfer technology are named as iterations to indicate performance and new capabilities. For example, USB 1.0 is less advanced than USB 2.0, and so on. If you’re a little shaky on the differences between them, here’s a quick rundown.

USB 1 is the oldest iteration and was introduced in 1996. It debuted with Windows 98 and had only 12Mbps transfer speeds (about 1.5MB/sec). USB 1.1 was released in 1998 and did not improve on transfer speed but offered a “low bandwidth” mode.

USB 2.0 came about in the new Millennium in the year 2000. It included support for powering devices but was still limited to 12Mbps from the 1.0 days. It did have a theoretical max speed of 480Mbps.  Many devices still come with the 2.0 standard.

Here is where it can get a little tricky. USB 3.0 was released in late 2008 and adds the “SuperSpeed” transfer mode, 5Gbit/s. 3.1 was released in summer of 2013 and was relabeled USB 3.1 Gen 1 due to the introduction of the SuperSpeed+ transfer mode for the USB 3.1 Gen 2 specification, which doubles the speed to 10Gbit/s. USB 3.2 was released in 2017 and includes the other 3.0 specification capabilities but includes increase bandwidth to assist with the USB-C type connector. The differences between Gen 1 and Gen 2 are small and a lot of people wonder why they even bothered with it in the first place. However, the advances probably didn’t warrant upping the naming convention. Gen 2 is really just slightly upgraded Gen 1 so it didn’t make any sense to label it USB 3.2, especially since the real 3.2 made such a jump in performance and port compatibility.

The USB IF also just announced their newest iteration, USB 4,which they project to be ready in mid-2019, which means that you probably won’t see devices with it enabled for a while. It does boast a maximum speed of 40GBps, which is double that of USB 3.2. However, this is the same standards as Thunderbolt 3, which have been around for several years already. USB 4 does deliver up to 100W of power and can be used with external graphic cards and power two 4K monitor displays, or a single 5K display. Even though these capabilities have been around for awhile using the Thunderbolt, the implementation of these specs by USB means that cables will become more widely available and cheaper.

Unfortunately, because USB is an open standard, using these new capabilities is entirely voluntary for manufacturers. This means that your mobile phone or other device may not be able to take advantage of USB 4 if the manufacturer hasn’t implemented it. The point of USB 4 is to begin to standardize certain features and to cut corners and save money, some manufacturers will probably avoid offering or providing these capabilities. USB IF certification is also voluntary and not required to sell.

In addition, USB 4 uses the USB-C connector port only. Previously, USB utilized different colored ports to indicate which version was supported for that device but with USB-C that is not possible. Manufactures are not required to label ports or cables, so it will devolve into a guessing game about expected performance for users.

With no labels and unenforced industry standards creating a mess for the USB platform, it’s no surprise some are rolling their eyes at this news.  USB technology is extremely useful and important in today’s tech but the fact that they’ve been playing catch up to the Thunderbolt 3 and cannot reliably provide consistent performance does nothing to endear current and future users to the USB brand.