Why You Should Think Twice Before Using Airport USB Charging Stations 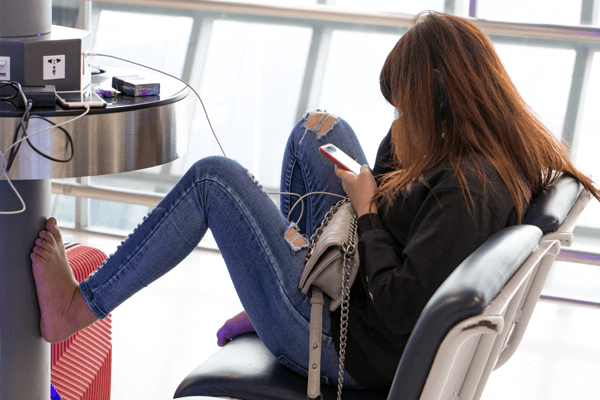 With our reliance on hand held mobile devices like cell phones and tablets not likely to end anytime soon, it’s important that we become aware of the dangers associated with their use in public. Specifically, charging them in public. Let’s face it: while you’re out and about, you will take advantage of a free electrical outlet to give your phone a quick boost. This is especially true for transportation centers like airports which often now come with the added perk of free USB charging stations helpfully located near or within gate area seating.

But you really shouldn’t use airport USB charging stations. It’s simply too risky! Although these ports are free to use, they could cost you a lot in the end. If a hacker manages to gain access to a public USB port, they can easily install a chip which will deliver the contents of your phone right to them. Of course, this is difficult to achieve for highly secured areas like airports. However, for places like coffee houses and less regulated public places, this is entirely possible.

Since airport USB charging stations are not as likely to be tampered with themselves, scammers have turned to other options. They simply leave a charging cable laying around for an unsuspecting traveler to scoop up and use. The cable will have a chip added that will download malware while charging the device, and for the low cost of the cable and materials, will have access to all your information. Apple charging cords are a favorite. 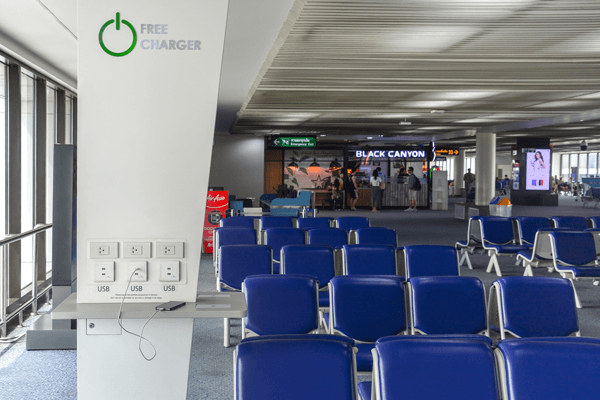 Another ploy is to drop infected USB drives. The idea is that a passerby will pick it up and plug it into their computer to see what is stored on the drive, not realizing they have just exposed their computers to malware. This tactic works surprisingly well. A 2011 found that 60% of people who picked up USB drives and CDs they found put them in their work computers. That number jumps to 90% if the drive or disc is printed with an official looking logo. Clearly this method works to distribute infected software.

If you’re thinking that this problem is overblown, then you are incorrect. According to research from the IBN X-Force Threat Intelligence Index, in 2018 the transportation was the second most attacked industry. Furthermore, this is a jump from its ranking in 2017 where it was only the 10th most attacked. The Index also noted that since January 2018, 566 million records from the transportation and travel industry were compromised or leaked.

It is advised that while travelling, you bring your own charger and plug into a wall outlet. You could also carry a portable power bank. If you must absolutely use a USB port, you could invest in a device called Juice-Jack Defender. It is a dongle that blocks data from passing from the cord, allowing only voltage (therefore only charging the device). It only costs $10. Also, be wary of any loose USB drives or charging cables you encounter. It may be tempting to take the charging cable to the tune of finders keepers, but as it’s very difficult to quickly tell if a cord is compromised, the risk isn’t worth the few bucks you’re saving. Practice common sense and keep strange drives and cords away from your personal devices.